A year ago, if someone told me that I would end 2016 at Everest Base Camp, I would never have believed them! Part of my journey last year was about simplifying my life – not adding enormous challenges that I wasn’t sure I could accomplish!

But there you have it – an invitation to join my cousin on a 2-week trip to Nepal where she aimed to reach Everest Base Camp for the second time. To be honest, I was quite curious – I had absolutely no clue where Everest actually was. Or what “Trekking to Base Camp” actually meant. I had also watched the Everest movie and can assure you that there was no way on God’s green earth that I was going to try and reach the summit!

A few hours (and a few drops of Rescue Remedy later), I sat down at my computer and began to research the trip. Firstly, Everest Base Camp is where those planning to summit Everest are based during their acclimatisation time prior to summiting. Secondly, I would just have to walk (not climb). Thirdly, the altitude is pretty high at 5,600m above sea level. Which meant nothing to me at the time – but apparently it was high enough that some people got altitude sickness and had to be taken down by helicopter. Riiiight.

I then entered into this weird headspace where I found myself actually wanting to go – which was alarming in itself. I mean, I’m not sporty. At all. I had one year of Boot Camp under my belt – but being able to do 30 squats in a row would not help me much on this trip. Nor, ironically, would those dreaded “Mountain Climbers” be of much use. So why on earth was I even THINKING about it?

But you see, the thing is – hidden pretty deep down (probably under a few fat rolls) lies an adventurous spirit that I’ve beaten into submission over the years. And that spirit was getting quite excited at the thought of doing something so out of character! Like heading to Everest!

And so, after about two weeks of thinking and going backwards and forwards, I decided that the main reason for my hesitation was that I was scared. And that it was out of my comfort zone. And that there were no Starbucks or Sorbet Nail Spas along the way – a girls has her standards!

So I said yes. And no-one was more surprised than me. I began heading to the dreaded Westcliff stairs each week. And taking part in every 10km walk I could find. And spending Sundays doing 20kms walks with my cousin. The aim was not to walk at speed (no argument from me there!) but to get used to hours of walking. And getting up the next day and doing it again.

And then we were off – duffel bag packed, children hugged, husband kissed – and I was on  a plane to Nepal wondering if I had really thought this through. That feeling was to happen quite frequently on the trip – when we flew into what’s called “The World’s Most Dangerous Airport” (it’s really not that bad – it’s just perched on the side of a mountain and the plane was so small I could have plaited the pilot’s hair); when I had food poisoning for 24 hours; when listening to a talk on altitude sickness; and when crossing one of the many suspension bridges that I later grew to love – behind a herd of yaks. 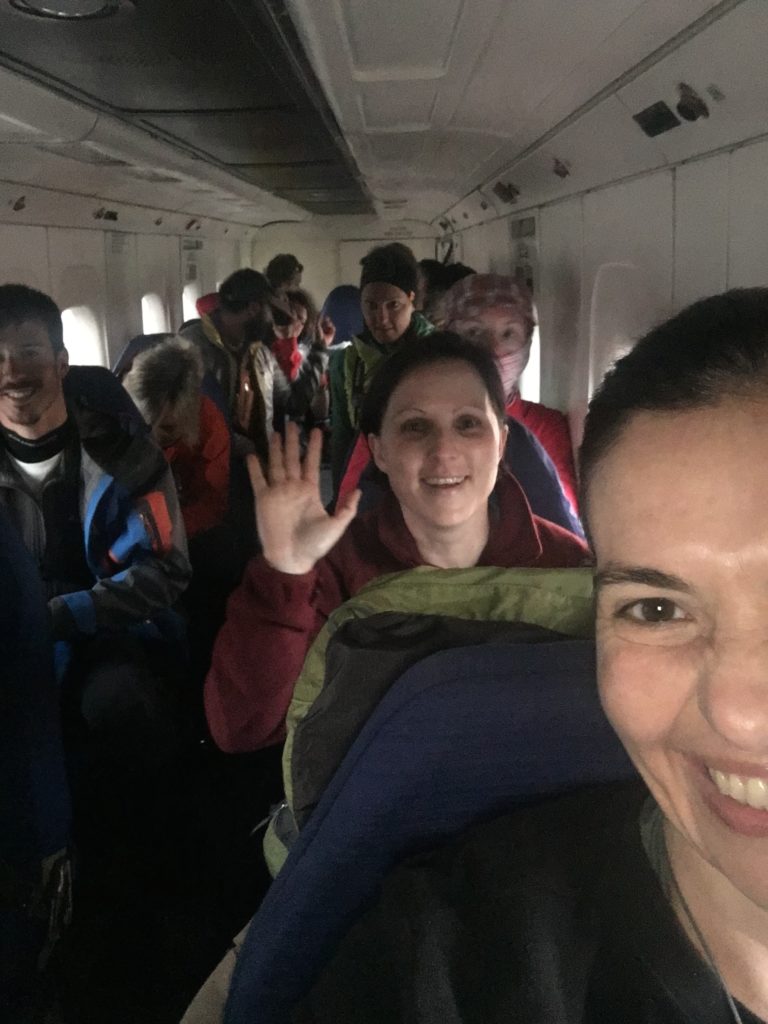 The plane trip into Lukla. The pilot was right in front of me! Waiting for the yaks to get off so we could cross!

But nothing – nothing at all – could prepare me for the person I found on the mountain. The person who remembered that she can do hard things. That being outside of her comfort zone is actually where the magic happens. That the greatest joy can be found living out of a duffel bag, walking along a trail, and having not a single task on my To Do list other than “walk”. That I fill my life with so much “stuff” that being present in the moment is almost as hard as climbing a mountain. And that if we don’t make the time and space for an adventure, it will never happen. And the days will pass anyway… 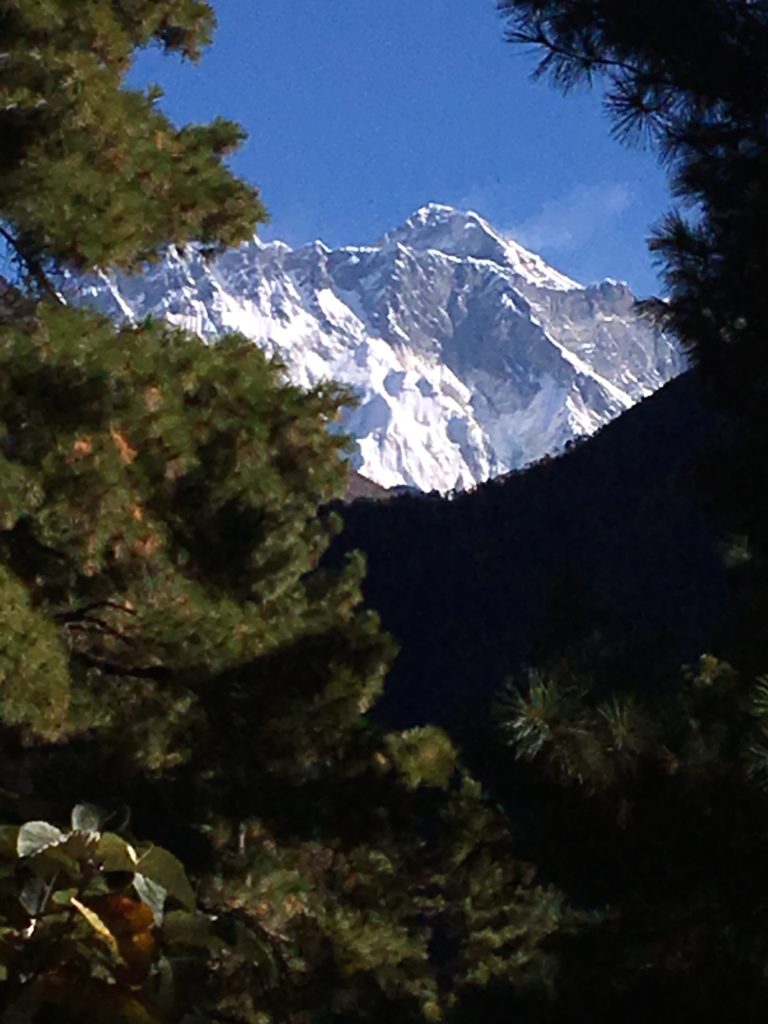 First view of Everest through the trees!

Was it hard? Yes. Physically, I managed far better than I had expected to. The pace is deliberately slow to conserve as much energy as possible. You walk in the mornings and spend the afternoons reading and playing UNO and watching other people. And even the days that were tough, were still completely magical. 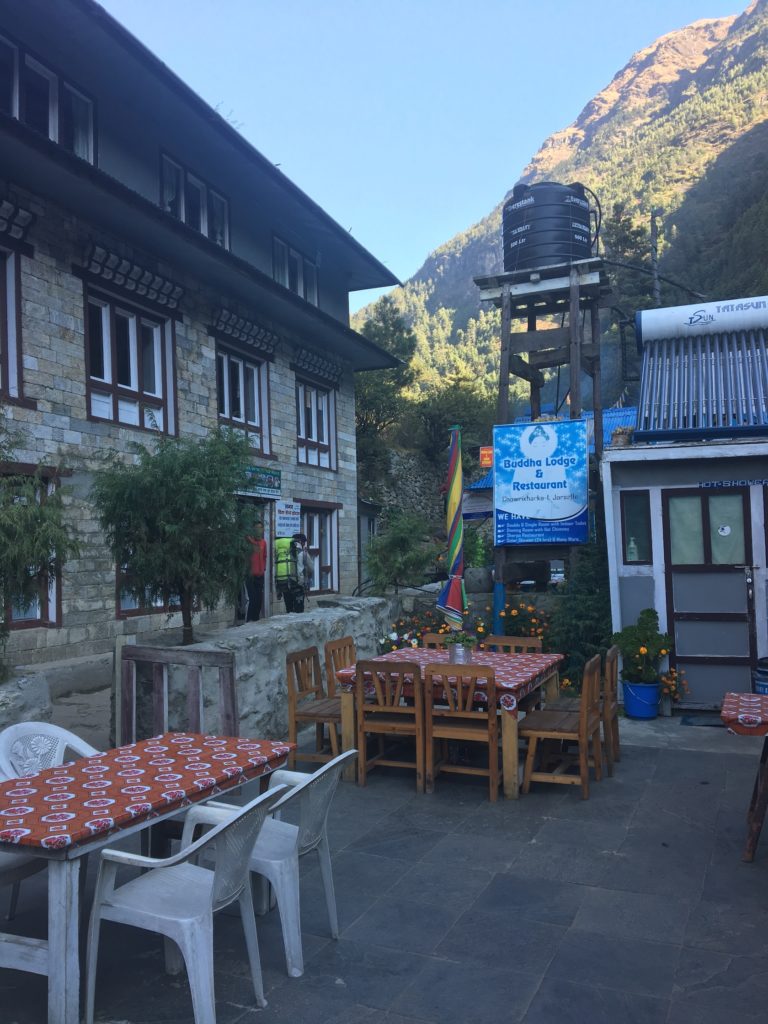 One of the many tea houses we slept in, or had lunch in en route!

To be honest though, I wasn’t as prepared for how the trip would challenge me mentally. Seeing massive uphills in front of me and knowing that there was no other way to get there than on my own two feet? Well, it was tempting to psyche myself out, instead of just putting my head down and starting the walk. Not to mention the fact that I had left pretty much all my comforts at home – my husband, two children, electric underblanket, bath oil, Nespresso coffee and Woolworths. Oh my goodness, the fantasies I had about Woolworths food – avocados and grapes. Fresh fish! Grilled chicken – all the things that weren’t available on the mountain. And being sick while away from home – that was a test in itself. 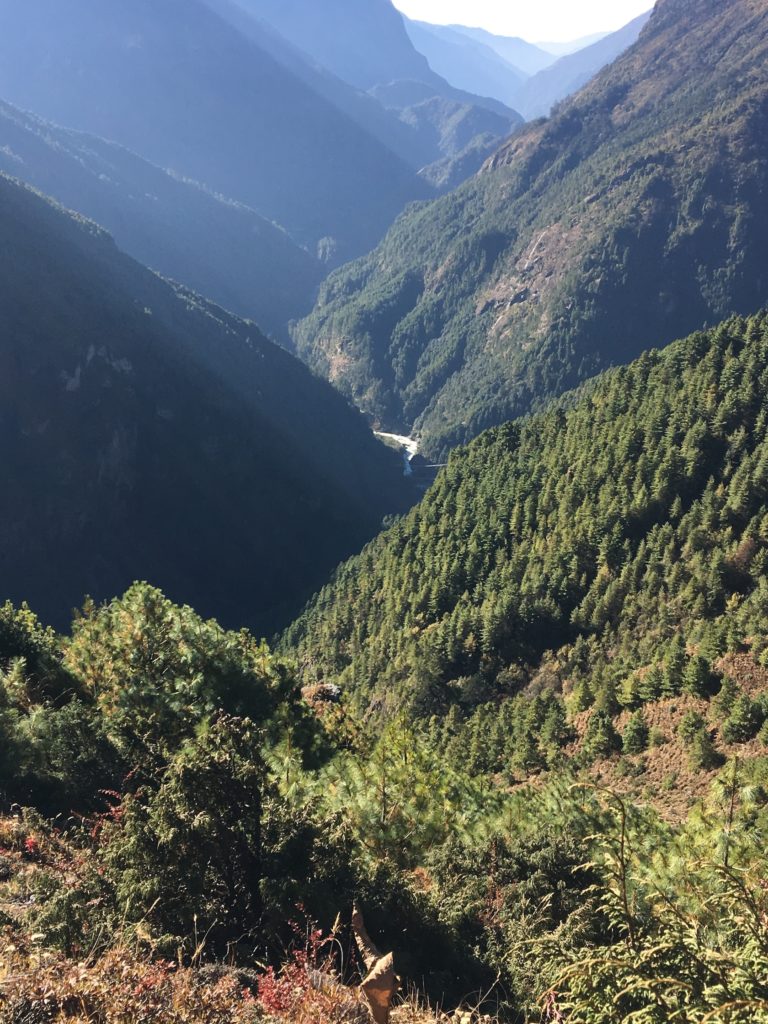 Breath-taking views around each corner! 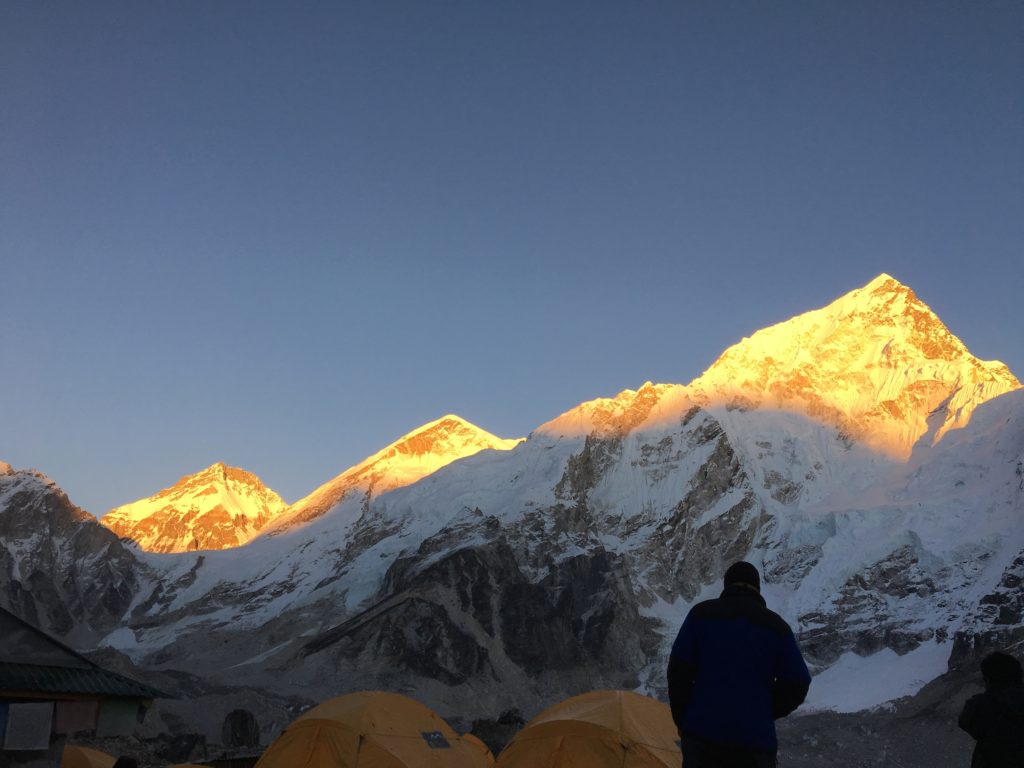 Sunset in the Himalayas 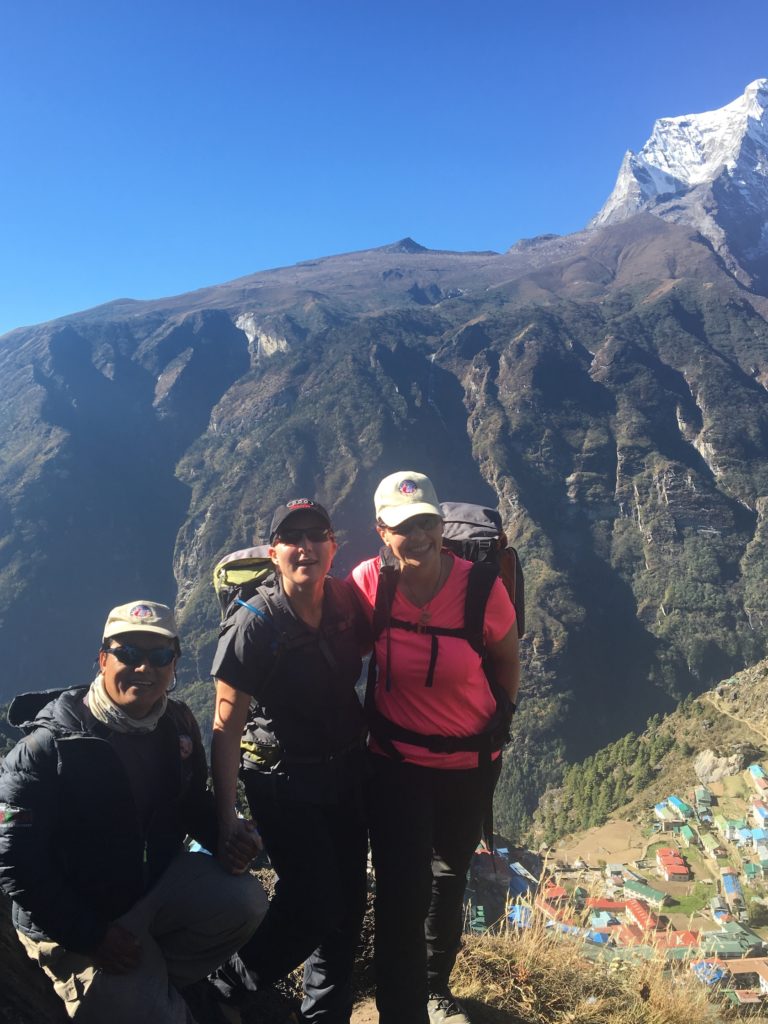 Looking back at the village where we had spent the previous night! Hupendra – our guide (left), my cousin Lisa (centre) and me (right).

And let me tell you – nothing could prepare me for the sheer beauty of the Himalayas. It was like walking in a postcard each minute of the day. And I kept saying to myself, “I’m actually doing this! I’m here! I’m actually getting to Base Camp!” And I did. And yes, I cried when I got there. I cried with relief that my body had withstood the altitude. I cried with pride that I had made it (that last day was tough!) And I cried because I wasn’t sure I had the energy to get back down again!

Which I did. And with each step down, I marvelled at how far I had climbed and the fact that I had actually done it. 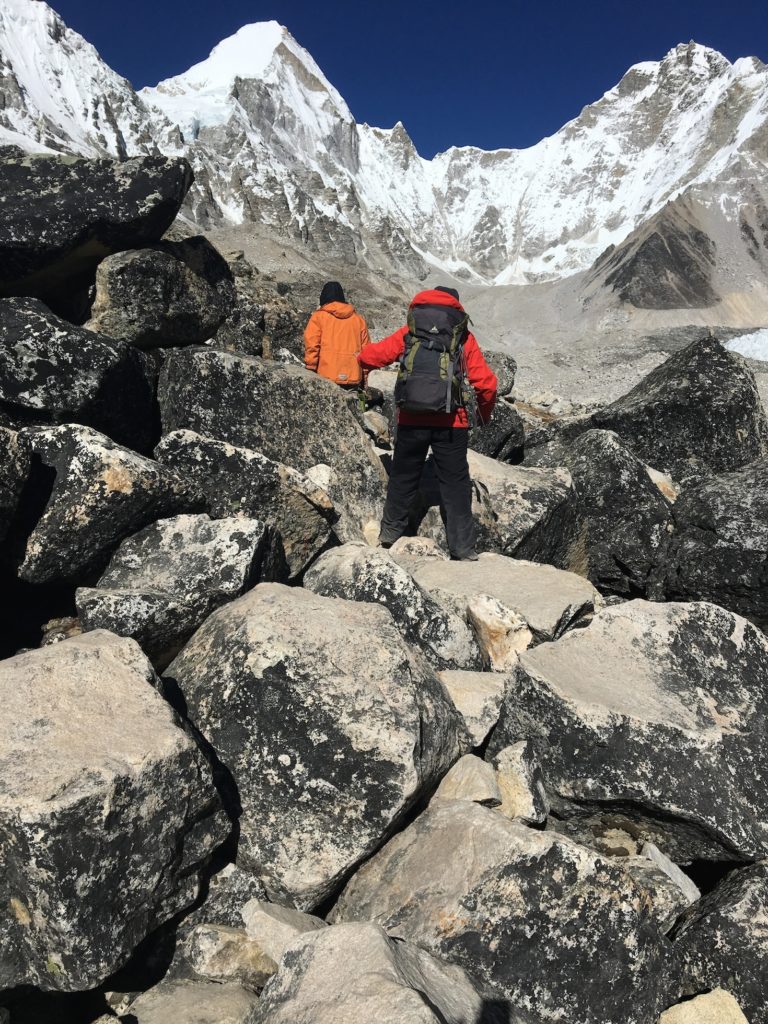 About an hour outside of Base Camp – when I began to wonder if I would make it! 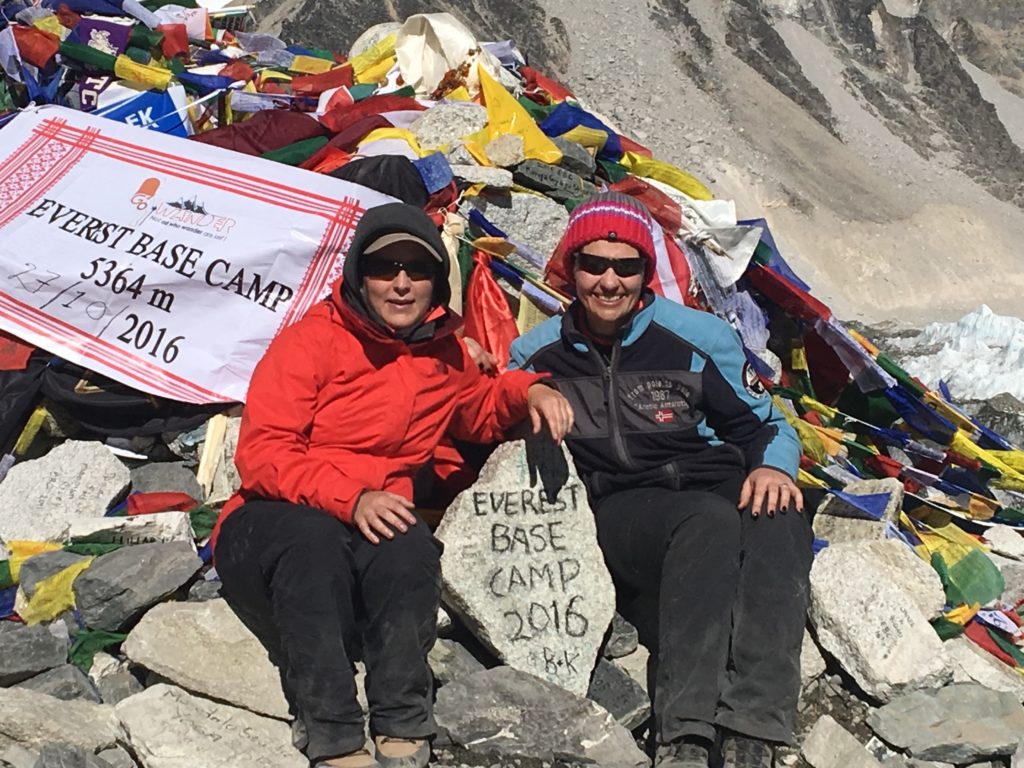 Lisa (left) and me (right) – after I had stopped crying! What a moment!

Would I do it again? I came back feeling as though I had ticked it off my Bucket List and could now look for other challenges. But that being said, there is a pull to those Himalayas that I have never experienced anywhere else. Perhaps it’s the spirituality of the place and the people. Maybe it’s the breath-taking beauty of that part of the world. And maybe it has something to do with a part of me that I discovered there – and the part of others that I saw, as they too stepped out of their comfort zones and accomplished something so monumental.

Next on the agenda is the Inca Trail in Peru – every spare cent is now being funnelled into my adventure fund. I was also invited to talk at my daughter’s school where we chatted about doing hard things, and being so much stronger than we know, and making sure that we do things our future selves would thank us for.

Because that’s REALLY why I did this trip. I mentally pressed fast-forward on my life and came face-to-face with my 80-year old self. And I asked her what she would recommend I do. And you know what? She looked at me as though I was mad for even ASKING the question. Of course I should go. And so should you! Have the adventures. Do the exciting stuff. Your 80-your old self is right behind you, encouraging you all the way!

(For more information on a trip to Everest Base Camp, Kilimanjaro, Machu Picchu and more – visit www.adventuresglobal.net) 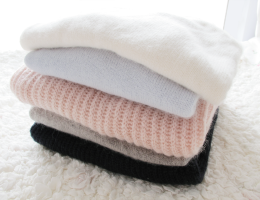 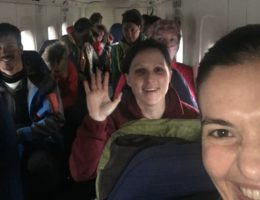